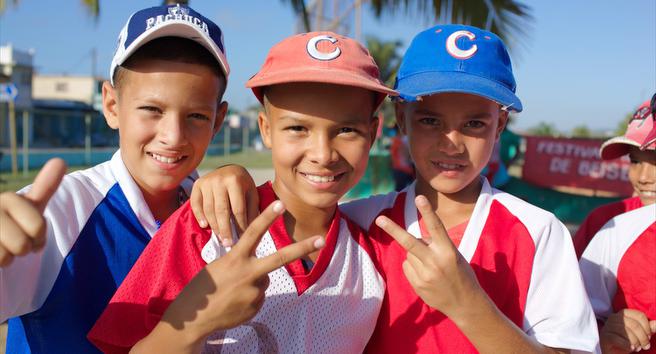 A goodwill baseball tour to Cuba initiated last year by Bridgewater Coach Dennis Woodworth has quadrupled in size and duration. The event is now attracting the attention of former pro players, and includes baseball teams from four other Canadian provinces.

More than 440 people, including 191 minor ball players and their coaches will be participating in the second annual Nova Scotia Cuba Goodwill Baseball Tour from Jan. 31 to Feb. 28, bringing with them the love of the game, community spirit and sportsmanship, an estimated $70,000 worth of baseball gear, as well as school supplies.

“It’s amazing to see the outpouring of support,” said Woodworth. “There has been a lot of effort on both sides of the border to make this happen.”

The first week of the tour will see two teams from Nova Scotia (boys under 13 and 16) travelling to the province of Matanzas, Cuba, where they will visit schools and take to the diamond with their Cuban counterparts. Devon White, former Toronto Blue Jays centerfielder, who was on the 1992 World Series winning roster, and Boston Red Sox hall of famer Bill (Spencer) Lee, will be tagging along. “The program is getting a lot of attention from former professional players,” said Woodworth.

The second week of the tour will be “monumental,” said Woodworth, with two girls’ teams making the trip to help develop girls-only baseball in Cuba. “This has never been done before,” he said. “In Cuba, baseball is thought of as a boys’ sport.”

Fredericton, N.B. and a Nova Scotia boys’ under 11 team will be making the trek during the third week of the tour. Teams from Winnipeg, Prince Edward Island and Newfoundland will wrap up the tour in week four.

From the South Shore, a total of 10 minor ball players have been selected by their coaches and associations as candidates for the goodwill tour. Female baseball players Katelyn Ross, Cape Sable Island, and Evan Guthio, Bridgewater, will be on the roster for Nova Scotia. Selected for the boys’ under 11 team from the Bridgewater area are Brandon Wentzell and Michael VanDantoorn. Bailey Gladwin and Griffin Chase, also from the Bridgewater area, are on the under 13 roster. Ryan Hardy, Shelburne and Brad Jones, Yarmouth, are on the under 16 squad.

“We try to identify kids and players that love the game, who are community minded, do well in school, are highly sportsmanlike on the field and love the game,” said Woodworth. “These are not teams of all-stars. These are teams of players that represent Canada. This gives our kids a chance to wear a Team Canada jersey representing Canada on a goodwill tour. It’s a proud moment for me to be able to have kids from all over wear the jersey.”

Coach selection is based on contribution to the game of baseball, said Woodworth. “Some coaches have been involved in the game for 40 years. It’s as exciting for the coach as it is for the players.”

Woodworth said all the teams have been fundraising, and collecting equipment and school supplies to support the program. “This is a huge team of people,” he said.

In addition to the goodwill tour to Matanzas, the program is expanding into the neighbouring province of Holguin, with the inaugural trip planned for April 4 by a team from P.E.I., said Woodworth. As well, a minor ball team from Matanzas will be travelling to Nova Scotia in either June or July for the opportunity to tour Nova Scotia and play ball on Canadian soil for the first time. “It’s never been done before, said Woodworth, who met with the Cuban government in December to make the arrangements and further build the baseball bridge between the two countries. “We are now the only sanctioned baseball program in Matanzas,” he said.

Woodworth said the plan is to wrap the visit around Canada Day, adding there will be a game or two played in the Bridgewater area.

Woodworth said it took three years to build the goodwill program prior to the inaugural one week tour last year. A total of 123 people from across the province, including 33 players, took part in that tour, collecting and donating $15,000 worth of baseball gear. “It has grown a lot,” said Woodworth. “There really is an incredible need for what we do. There is not a lot of assistance down there.”

The payback? “This is a gift to me,” said Woodworth. “It allows me to be connected to the game across the county. (Cuban) communities can now build a baseball team which they couldn’t do before. I think that’s why I’m so proud. I’m very excited about the impact. My goal is to help them accomplish their goal.”