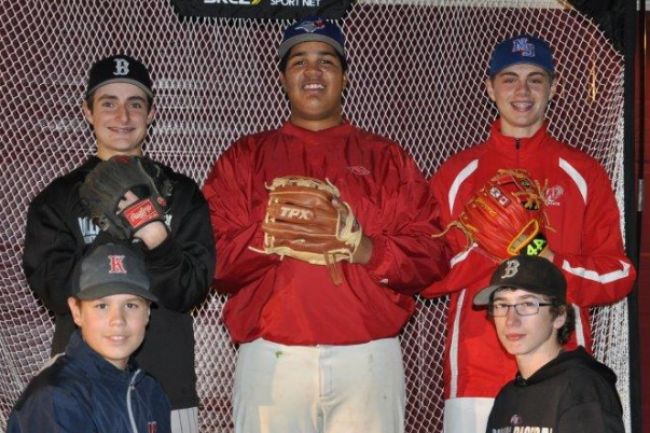 Among the Kings County ball players going to Cuba soon are: in the back row Doug Hassell, left, Dyton Blackett, and John Payne. In front are: Kyle Woodworth, left, and Nathan Rudderham.

KINGS COUNTY – For a coach, Dennis Woodworth is one inspirational guy. He can even get non-sports buffs excited about baseball.

“Girl, let me tell you, it’s my life,” the Bridgewater coach says. And it has been his passion for four decades.

Woodworth, along with 10 ball teams from four provinces, are headed to Cuba. Two of the teams going are girls’ teams.

“Thirty per cent of the spectators are women,” he says of the Cubans. “They love the game. It’s a huge sport. So we’re sending 40 girls down there as ambassadors.”

Several young Kings County male ball players are taking part in the 2015 Canada-Cuba Goodwill Tour. John Payne from Port Williams was on the provincial selects team that competed at nationals. Doug Hassel and Nathan Rudderham played on the Bridgewater Bantam AAA team that captured the Atlantic Championships in Charlottetown back in September. The others Kings County players are Dyton Blackett and Kyle Woodworth.

Woodworth, who is head coach of the goodwill tour, says the youth, aged 10 to 16, will be visiting the island over a four-week period. They’ll all be wearing uniforms that say Team Canada.

All the players were selected not only for their baseball abilities, but also for their love of the game and attitude of commitment and sportsmanship.

Each team member, he says, will make Canadians proud to have them representing our country. Furthermore, Woodworth adds, the Cubans can’t wait for the Canadian contingent to arrive.

‘Then they’ll actually get to play. They have literally no equipment and they can’t afford to travel (on the island),” he says.

“We’ll probably be contributing $70,000 worth of gear to Matanzas baseball program this year with all the teams that are going.”

Only 35 minutes from the resort village of Varadero, Woodworth says Matanzas is a huge baseball community and it provides a safe environment for the players.

They will play 10 games against Cuban teams over a seven-day stay. The players will also visit  schools to bring supplies and the homes of Cuban players. That way, he says, they get a chance to experience Cuban culture.

Fundraising toward the cost of the trip, as well as baseball equipment, clothing and school supplies, are been ongoing. The Canada-Cuba Goodwill Tour starts on Jan. 31 and will even include two former professional players, Devon White and Bill Lee.

“We are great ambassadors for the game and our country,” says Woodworth. “I have been a part of many great moments through the game of baseball in my life. This is right at the top of the list.”

And Woodworth’s baseball resume has some high spots. He was a high performance player for almost 40 years and an award winning coach at the South Shore and national level.

Going to Cuba, he said, is a great opportunity for the Atlantic region, which rarely gets such opportunities, and allows kids to play baseball in the winter. There is also the humanitarian aspect of providing equipment and teaching local youth how fortunate they are to live where they do, says Woodworth.

“I’ve been absolutely blown away,” he says. “It’s very emotional.”

His involvement began three years ago, after he was tapped on the shoulder at a Cuban resort by a fellow baseball player, who recognized his Jose Batista shirt. Woodworth realized young players and families could share a baseball experience on the island.

Now he believes fervently that the connections the game is making feel right.