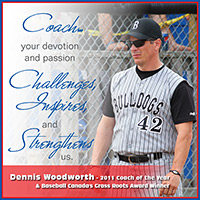 “This was an opportunity to allow Canadians and Americans to have a life learning experience through baseball. It makes an impact on the kids in both our country and theirs! It just doesn’t get any better than that!”

Dennis Woodworth has been involved in baseball as a player, coach, umpire, regional director, supervisor of coaches, board member and parent over his 40 years in baseball! His experience in baseball is extensive and he has made an impact in people’s lives all over the country! 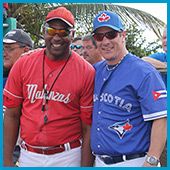 “My idea was to give a moment in kids lives that they will always remember and take with them as a life learning experience. Something that lasts the test of time!” Dennis has taken his teams to provincial, regional and national tournaments over the years and recognized the impact that events like that meant to the players and family members.

“It would have been a dream of mine growing up to play in one of the hotbeds of the sport I love so much.” Dennis adds. That is when he started working on developing relationships with residents in Cuba, Dominican Republic and Puerto Rico. The tour covers every base in organizing an incredible experience! “We are also looked at in these countries as Canadians and Americans making a difference in their kids lives! We are great ambassadors for the game and our country.” says Dennis. “ I have been a part of many great moments through the game of baseball in my life. This is right at the top of the list!”

The tour is a one stop shop where all of the details are covered and Dennis is on location to ensure that all of the details are looked after. Mr. Woodworth evens owns a travel agency so that costs are under control including booking the trip, doing the fundraising, generating government funding, etc. He guides you through the whole process from beginning to when you return home!

Check out some of Dennis’ baseball resume: 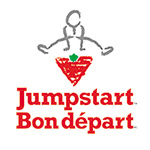