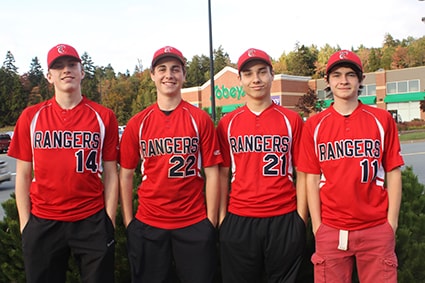 All 10 will be taking along baseball gear such as batting gloves; baseball bats; gloves; uniforms; and much more to give to players and children in the village they will be visiting. The week-long trip runs Jan. 31 to Feb. 8, 2015.

I think it will be a good experience for not just me, but for everybody that is going,” said Griffin, a Lower Sackville resident. “I think it will be fun. We get to meet them and play some ball, and help them out.”

He said he’s anxious to see their reaction when they get the items the Nova Scotians are bringing. Griffin feels he was selected because of his love of the game.

“I’m excited to the smiles on their faces,” he said. “I get excited every day. I’m counting down the days until we go.”

Dennis Woodworth of Bridgewater was the coach that kicked things off, taking the first group to Cuba in 2013. The players going were chosen based on their attitudes and willingness to go and help out, over their statistical performances on the field.

This is the second year for the mission, but will be the first year female players have been selected to attend on their respective age groups going. The groups taking part will be the under-14 and under-17 girls and under-11 and under-14 boys.

The 14-year-old Griffin—who found out he was going last May—said he wants to learn about their culture and believes it will be very educational. He also wants to hold onto the memories created from it.

“Years from now I want to think back to the Cuba trip and think what I did to help,” said Griffin. “I’d like to remember the kids down there, learn how they live on a daily basis, and thoughts on how we can help out.”

Driscoll, 14, said every time the thought of the Goodwill trip crosses his mind, a smile crosses his face. He also found out in May he will attend; he had heard nothing but great reviews from friends who went in 2013.

“It makes me think about the opportunity I am being given to create positivity for those in Cuba and to help them out,” said the Lockview High School student. “It will enhance my baseball knowledge and my education about their culture and the way they live.”
He said the memories and the knowledge they bring back will be useful in future years.

“I not only want to play baseball, but create a positive optimism for the kids who will be able to play the sport thanks to the equipment we’re giving them,” Driscoll said. “It will put a big smile on their face. That’s really what I want to see.”
Davis, 15, is ecstatic about the great opportunity being provided.

“It’s unimaginable really,” he said. “I never thought I would get the opportunity to do something I love and help them out as well.”

The Newbridge Academy student said he believes he was selected because he showcased what the coaches were looking for—the willingness to learn and give back to others through ball. He is hoping to create a lot of memories. “It’s going to be great,” Davis said.

MacKeigan, a Fall River product, said he is extremely thrilled to be provided the opportunity to represent his country and province on the journey.

“I just want to see the smiles on their faces with all the gloves, bats, and more we are bringing them.”

The Georges P. Vanier Junior High School student only found out in mid-September that the management had selected him to attend.

“I was bouncing off the walls,” recalled the Bantam AAA Ranger. “It means the world to me. I love the game of baseball so much, and this is a way for me to give back while playing the sport I love.”

He believes it will be an eye-opener, but also one that will bring an educational value for the players going. It will stick with them for the rest of their lives.