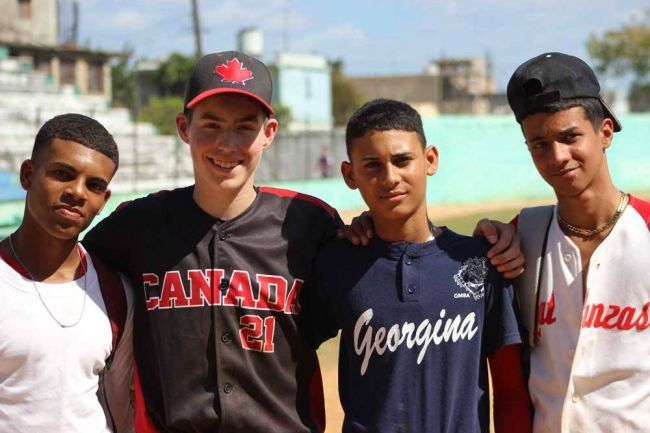 YARMOUTH – For a group of young baseball players and their coaches, you’d think the baseball would have been the most significant part of a recent trip to Cuba. And while that was amazing, say those who made the trip, equally as amazing was the interaction they had with the Cuban youth.

Billed as a Canada-Cuba Goodwill Tour, the teenage ball players played many games against local teams while in Cuba.

“The first game, they drove to us to a stadium in the middle of nowhere and the whole town was there. The boys were pretty impressed,” says Yarmouth resident Doug Jones, who was a coach with the visiting Canadian team that was made up mostly of Nova Scotian players. His son Brad was a member of the team, as was former Yarmouth resident Brett Mercier, whose family now lives in Moncton.

In Cuba, baseball is big.

“They play everyday down there, it’s incredible,” says Doug Jones, who aside from being joined by some fellow Nova Scotian coaches, was also there with former Major Baseball League players Devon White and Bill Lee. In Cuba the players and coaches also got the chance to interact with Fernado Sanchez of Cuba, who holds every major record in Cuba when it comes to baseball.

The team brought with it around $75,000 in donations from local residents and companies. On the ball field they handed out equipment to the young Cuban ball players.

During school visits they gave out school supplies.

“We had about 10 hockey bags filled with gear, everything from baseballs, to baseball bats, gloves, training aids, you name it,” says Jones. “The equipment that they use is pretty run down. A lot of these great players in the field are using gloves that we would have thrown away.”

He estimates they donated between 75 to 100 gloves to the local players.

The simple gesture of giving a glove away turned out to be incredibly meaningful for Jones and his son Brad.

Brad had made a special connection with a Cuban ball player who played second base, the same position as Brad. On the last day they were there the Yarmouth teenager decided to give the local player his glove.

“He didn’t have a very good glove. I thought I’d just give him my glove because I didn’t really need it,” says Brad. “I have a lot of gloves. I thought he would need it way more than I would.”

About half an hour later the Cuban ball player’s father and mother approached Brad and Doug. The parents were both crying.

They two Yarmouth residents didn’t need a translator to understand how meaningful this gesture was to these parents.

“His mom comes over, she’s bawling her eyes out, she was so happy,” says Doug. “There, when you give somebody something like that, it’s almost like you’re giving somebody a chance for something greater because they all see baseball as a way to prosper.”

The next day the same mother showed up with a cake she had baked for the Canadian ball players.

“They were really grateful,” says Brad, who adds one of the things that impressed him was how much the kids in Cuba love baseball.

“There’s kids playing in empty fields that aren’t even baseball fields, which you never see around here,” he says. “You never see anyone playing baseball, unorganized, just for the fun of it.”

A trip is also in the works to have some of the Cuban ball players come to Nova Scotia this summer as an extension of the goodwill visit.

This Canadian team that the Yarmouth residents were involved with spent its time in Mantanzas, Cuba. Other teams of different age groups from Canada (which also includes Nova Scotia players) have been or will be making the trip to other parts of Cuba as part of this goodwill tour. This included an all-female team.

Brad Jones, meanwhile, says between the baseball, the interaction with the young Cubans and their unbelievable gratitude over the donation of baseball equipment and school supplies, taking part in this goodwill tour is something he will never forget.

“It was probably the best experience of my life, so far,” says the Yarmouth teenager. “It was amazing.”