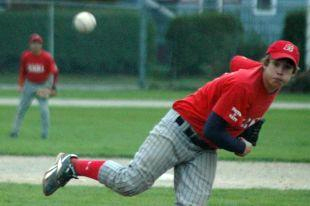 Riley Nickerson fires one over the plate during high school baseball action. Nickerson has been selected to participate in the Nova Scotia Cuba Goodwill Tour next February.

Skill, sportsmanlike behaviour and a love for the game has earned 15 year old Barrington baseball player Riley Nickerson a spot on the Nova Scotia Cuba Goodwill Tour next February.

Nickerson is one of 33 players from across the province who have been selected by Baseball Nova Scotia for the tour, said Coach Dennis Woodworth, Bridgewater, the event organizer.

“Riley is just one of those genuine individuals who loves to play baseball,” said Woodworth. “He was an easy selection for us.”

The 33 Bantam age and under players, chosen not only for their skill, but for their attitude and genuine love of the game, will be ambassadors for Canada and the game of baseball during the week long goodwill tour, said Woodworth.

“We wanted to be able to take some of the best ball players in Nova Scotia and show them what it’s like to live where you can play ball every day of the year,” said Woodworth, noting that Cuba is one of the top ranked countries in the world for the sport.

“They live, eat and sleep baseball,” said Woodworth. “It’s a lifestyle down there. Our players will learn from them certain aspects of the game. It will be the trip of a lifetime.”

The Nova Scotian contingent of 123 people, including parents, coaches, players and family members are not going empty handed. Uniforms, hats and equipment will be donated to the two schools that will be visited during the week long tour, which will include a total of 10 games (five per division), humanitarian efforts and a trip to a Cuban major league game.

“It’s going to be a tremendous experience,” said Nickerson. “I can wait to go and see some real quality baseball players in Cuba.” Nickerson played with the Bridgewater Bulldogs this past season. The team captured the provincial Bantam AAA baseball championship, and were silver medalists in the Atlantic championship tournament.

“Riley’s level of skill development was expedited this summer,” said Woodworth. “He was a good team member and a good player to coach. I was very pleased with how he progressed.”

An estimated $50,000 will be needed to finance the trip. Two online fundraisers are currently underway: a facebook online auction (https://www.facebook.com/groups/650533058310442/) and a go fund me campaign (http://www.gofundme.com/4jefdw), both titled 2014 Nova Scotia Cuba Goodwill Tour.